There’s a famous Joseph Stalin quote that goes; “One death is a tragedy, a million is a statistic”. There’s an element of truth to it.

There’s also a tradition in economics that, when concepts get too big, you start breaking them down into helpful visuals.

Unfortunately, I’ve decided to twist their powers to convert statistics back into tragedies.

1: “How many entire human lifetimes does Jeff Bezos consume?”

This is a relatively simple calculation. What is the median per-capita income of the planet Earth, multiplied by the median lifetime.

Since this isn’t a rigorous scientific document, but rather some back-of-the-envelope stuff for fun (we are having fun, here, aren’t we?), we’re free to take Wikipedia’s numbers.

Wikipedia helpfully gives us a nominal GDP per capita at about $11,355 US dollars, and a global median life expectancy of about 72 years.

The GDP per capita takes into account the non-workers, the too-young and the too-old. So we can safely and happily multiply those two numbers together to get the median lifetime value of a human being on the planet Earth: Roughly $817,560.

If you were to throw a dart at the broad board of human life, you might hit Bill Gates or you might hit someone from Oasis in California. But you could expect it all to average out to about that.

Jeff Bezos net worth is 161 billion. That’s the value of over two hundred thousand entire median lifetimes. No, that number is still too big. It’s too immense.

We can break that number down into smaller timeframes thanks to BusinessInsider, which calculated his income in seconds, minutes and hours.

If Bezos makes $149,353 every minute, then that means he consumes the value of an entire human lifetime in… Less than five and a half minutes.

Every five and a half minutes, another human lifetime is burned at the altar of Jeff Bezos.

It’s also been reported that Bezos also gave only $145 million of his wealth as charity until recently, or .0906 percent at the time. Or, as Rafael Shimunov tweeted: 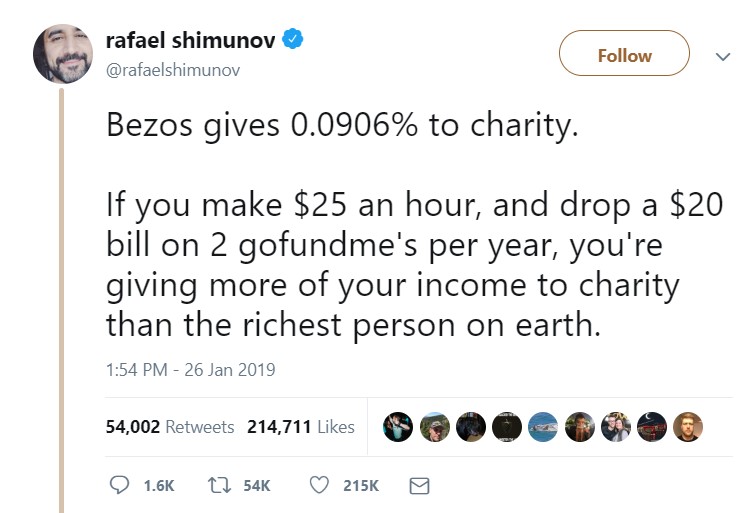 Before we go on, let’s compare it to how many people Bezos would need to literally consume if he was a demonic cannibal who could only live on human flesh.

Human flesh most resembles pork. The USDA suggests that 1 kilogram of cooked ground pork is about 3,930 calories.

The Oklahoma State Department of Agriculture also says that only about 57% of the weight of a pig ends up being usable meat. But that’s commercial numbers. Let’s say that Bezos is trying to really stretch every single part of his catch, though, and bump it to about 70% - Not because cannibal Bezos particularly values human life, but just because he’s too lazy to catch more people than he needs to.

Let’s also say that he’s hunting locally. Cannibal Bezos has massive hunting grounds all across the US, so we’ll get the general weight of an adult in the US: 80kg, according to Wikipedia again.

I will note that I checked off my Fermi equation here by checking to see if there’d been actual science on this, and found that The Verge reported that 125,000 was the answer found in the 1940s and 50s, but that the participants were 15 kilograms lighter - and 15 kilograms of fat is about 100,000 calories! Cool!

If Jeff Bezos needs around 2500 calories a day to maintain his body weight, then with access to a good freezer, he needs to eat one person every 88 days. Let’s call it three months, to be round.

According to the New York Times, a round trip flight from California to New York generates 0.9 metric tons of carbon dioxide. It also gives us the helpful number of the US average emissions: 16.4 tons per year.

Let’s compare that to high speed rail, and try to understand one of the reasons why the United States’ proposed Green New Deal scrawls “TRAINS” in thick marker over every other page.

First, let’s establish that what is proposed is possible by noting that China is doing it, planning to reach 38,000 kilometers of high speed rail track by 2025 - or enough to cross the United States entire width 8 times.

Next, let’s look at Wikipedia’s page on energy efficiency in transportation and their section on trains. Wikipedia is a miracle and we live in the future. They tell us what the per-passenger usage is!

China is giving us about 137 kJ per passenger-km. Some might be tempted to say China’s fudging the numbers, but it’s still higher than Japan’s.

I’ve converted into kilowatt hours to work out how much it’d be as a power bill. Apparently, because the US average price of electricity is 13.6 cents, it would be a $46 electricity bill, compared to a $500 plane ticket - that is, if you decide to fly a decent airline.

But wait! Before we go to the final tally, China has a 40% renewable electricity capacity! It’s actual use of renewables is closer to 30%, but that 40% isn’t a pipedream. Germany not only achieves that as of this year, but another 13.2% in nuclear energy.

Wait. Hold on. Germany counts about a quarter of its renewables - or 8.7% overall - as ‘biomass’. That makes things a little more complicated.

Alright, let’s just go with China’s 40% for now. They’re increasing renewable usage at an absurd rate. At the very least, it shows what we’re capable of if we work towards it right now.

So that means 60% is using fossil fuels - which Carbon Neutral calculates as around 0.18 tons of emissions, or about a fifth as the round trip by plane. If you managed to use trains and walking entirely, instead of using a car, the average commuter would go from about 2.74 tons of emissions a year to 0.3 tons - or the difference of more than two coast-to-coast trips by plane!

The biggest note to make here is that we can get that number even lower by boosting options like wind, solar and nuclear. There are many reasons why planes will be running on fossil fuels long after even cars and maybe ships have switched over.

Let’s end this on a hopeful note, then.