I Only Listen to the Mountain Goats

Traditionally a first blog on a site like this would follow a “Hello World” format. I’d explain a little bit about myself, what I’m trying to do here.

Instead, I’m going to talk about John Darnielle, a man who looks completely different and yet exactly the same in every single photo you see of him.

While not necessarily the mean or mode, the median John Darnielle looks like this: 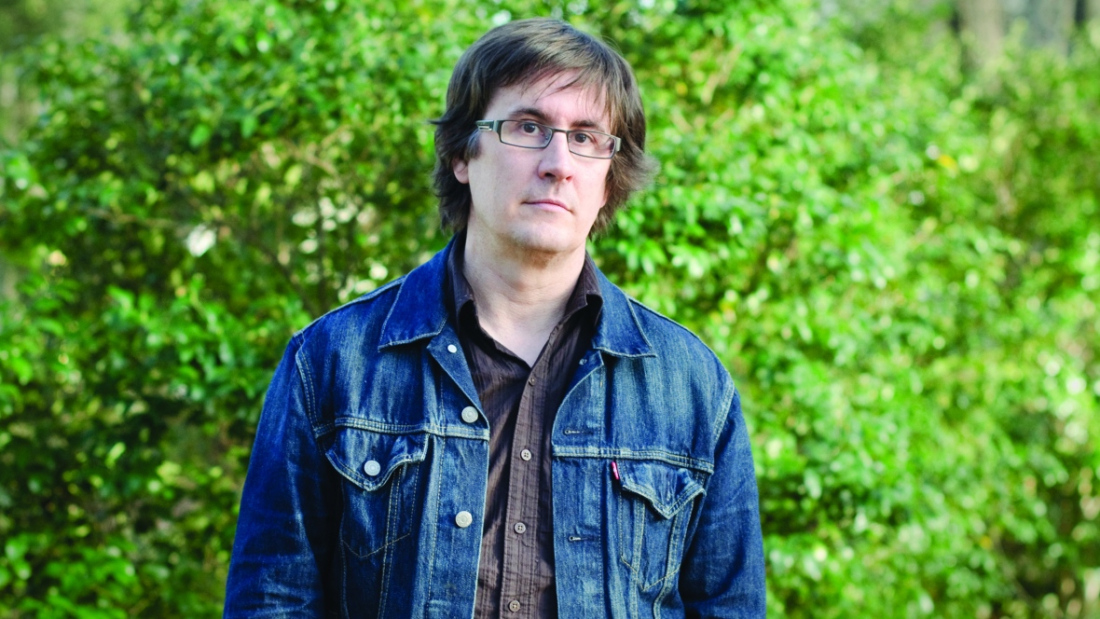 The prophet wears a denim jacket, and when the man bounces around the stage like some guys’ Dad’s accountant he preaches his gospel.

The music I enjoy, the songs I listen to, the games that really connect with me are rarely happy things. It’s not that I don’t believe happiness can be real, and it’s not that I don’t fully endorse the attempt to share it. I do, absolutely. The truth is, though, that happiness has historically been an unnatural state to me.

My favourite band is the Mountain Goats. At the start of 2017, I went to a concert of theirs in Melbourne. To get there, I had to blow over a year’s worth of savings scraped together from Patreon where I could, and my disability pension otherwise, all to see a scrawny middle aged man with an almost-bowl-cut pogo around like a hyperactive teeny-bopper. I saw him get lost in his music, when if anyone were going to have a map to it it’d be him.

Standing room only, because the venue was booked out. Another concert had been booked for the overflow, and that got sold out almost immediately too. Something about him is just that powerful: He is someone who’s faced down his demons, come out the other side, come out breathing, and he tells you the light at the other end of the tunnel isn’t just made of fire.

He’s almost normal, except he cares way too much. His songs connect because they aren’t just about what it feels like to be outside the tunnel; They’re about how fucked up being in the tunnel is, and what it’s like to not be out of it yet. Because there are so many of us in that darkness, but we’re spread thin, and in the places we concentrate we can cast more shadows than we let in light.

It’s important because he’s proof there’s a light at all, and that it is just a tunnel. Without him, you’re likely to think you’re just regular old buried alive and waiting to suffocate.

At the concert beside me stood a girl about my age, trembling in the crowd, holding a drink in one hand and throttling the straw with the other, focused on the stage. I said ‘hi’ to her, smiled.

And she just panicked. Worse than anything you ever saw from a creature larger than a puppy, screwed her eyes shut and clenched her fist around the straw, didn’t even look towards me. “Sorry, am I scaring you?” She doesn’t nod so much as tremble three times with her head.

Here she was, standing in a crowd pressed elbow to elbow in a sold out concert, and she came damn near an anxiety attack just from me saying ‘hello’. So I wrote on my phone a message I still have, and showed her that instead:

I’m sorry I scared you. I’m scared too, honestly. But Mountain Goats saved my life and I’m glad I could share that with someone who might get that.

And she passed my phone back, smiling weakly. Still scared shitless the rest of the night, but no more anxiety attacks when she glanced away from the stage and at me, which was, I think, as big a win as you can get with a person like that.

And it was true. I’m an agoraphobic magnet for muggings, and I was in a different city, in a different state. I didn’t know anyone, was out until midnight, and I was all doing it for this one dude. Because that’s how much that kind of message means to people like her, a person like me.

John Darnielle tells stories in his songs. He has about three minutes to tell it, and a lot of that’s going to be instrumental. He’s got to roll slow and pace it, so he sticks to poetry. You don’t listen to Darnielle for the music, though he is an extremely talented musician. You listen to him when you want Robert Frost, Edna St Vincent Millay and Chuck Bukowski played to four chords.

Darnielle gets one thing extremely well, and that’s humanity. More than anything else, Darnielle has proven himself to be good at being a human being. He’s good at thinking how people think, talking how people talk. That’s how he tells his stories, too.

One of the most unintuitive lessons for a new writer to learn is; your writing shouldn’t sound like writing. What a lot of people point to as good writing is actually not, because when you read it you’re taken out of the story to admire the words themselves. It breaks immersion, it’s disruptive.

Here’s a pre-amble to Palmcorder Yajna, a favourite of mine. This was delivered as spoken word before the song itself played:

This is a song about the inside of a motel. In particular, it’s both a single motel that I could point out to you where the building stood before God in his infinite mercy wiped it from the face of the earth, replacing it with, I would guess a CVS, just you know, just playing the odds there, rolling seven, it was probably a CVS. But before the CVS that we all know today, there were beds that smelled funky, stale in a particular type of stale that’s yet ever new, and cigarette burns that miraculously reappear if you replace the sheets with fresh ones and yet the burn returns, because the burn is a metaphor and you can’t, you can’t just change a metaphor out. You replace the sheet and the metaphor persists. That’s in the nature of these guys, right. I went to this motel in Los Angeles and I went to it in Pomona and I went to it in Portland and it wasn’t a chain. They were all independently owned. And yet miraculously, they were all the same motel. Not hotel. That’s for the people with money.

It’s a very prosaic way of speaking, isn’t it? But it’s immersive. Because it reads how people have a train of thought, how people think. When a sentence goes long it’s a complex sentence, it’s imagery to unpack, and then it’ll go into a series of short, simple meanings, unobstructed by metaphor or similie.

In other words, he builds an image, sets the stage, and then sets it in motion.

Here’s another preamble from seven years before, telling the same story from a completely different angle, a more personal one. Without the mythologizing.

“This is a song about how, when sometimes, sometimes you find it necessary to rob the safe in the restaurant where you work. And they, and it’s funny, because your friends who, like, have good jobs, say: ‘What good can come of that?’ And here I quote your friends: ‘They only have about two thousand dollars in there.” If you were honest with your friends, you’d say “Look, two thousand dollars will buy me a quarter pound of peanut butter crank, and I’ll be going for a good ten days off that, unless I meet up with some friends.’ Then you may stop to think to yourself, that you’re likely to meet up with some friends. New friends! People you didn’t really know, until word began to spread in the neighbourhood. ‘John robbed the safe! And he took all 2k, and he bought a quarter pound! He’s in room ten, 253 North Broadway, you can’t miss it. Faces Broadway at an angle across from the Colosseum.’ And so there you are with your new friends, listening to King Diamond as you do, high for three days and beginning to talk nonsense, and you may think to yourself ‘I wish I had a song to sing.’ You may only hold this thought for a second or so, but I heard you, when you thought that, and that’s why I wrote you this song.”

This one’s notable for another reason; There’s a great quality recording of the live performance so you can hear the delivery, you can hear how this is processed in human speech, how it worms itself into the kind of story a person would tell.

The Mountain Goats aren’t for everyone, lyrically or musically. But the speech should move you, hear just how much his voice inflects upon it.

And if you make it to 5:28, you get to see what I mean about the dancing too.Of course this is speech. Of course it reads like this, this is how he speaks, right? This is how a person, a particularly eloquent person though, talks. Of course it’ll read like that. But when a writer sits down to write, that’s lost right? It can’t sound like that anymore. Wolf in White Van, a novel by Darnielle, is nothing but a full book of that. It’s refined, it loses the stutters of delivery, it loses the stage fright… but it doesn’t lose the soul or flow.

It doesn’t read like good writing. It reads like hearing someone else’s thoughts. You couldn’t tear me out of that book with a prybar, and I should know because I read it in two days working an active film set.

Whenever a newer author tries to make their prose sound like prose, tries to make their writing read like a book, Darnielle is always the person I point them to. Because his entire discography is the art of telling the biggest, most impossibly nuanced ideas possible, and making them feel like your own lived experiences.

Somehow, Darnielle’s figured out how to bottle memories and condense a human life into an almost intravenous format. Here are some quotes from Wolf in White Van:

“I didn’t feel like I’d really won anything, but I had come through the day no worse off than I’d come into it, which, as I have been telling myself for many years now, is a victory whether it feels like one or not.”

“People trying to help you when you’re past help are raw and helpless. Nobody wins: you get nothing; they feel worse.”

“In video games you sometimes run into what they call a side quest, and if you don’t manage to figure it out you can usually just go back into the normal world of the game and continue on toward your objective. I felt like I couldn’t find my way back to the world now: like I was somebody locked in a meaningless side quest, in a stuck screen.”

“It isn’t really much of a mystery, this occasional need I have to comfort my father. I did something terrible to his son once.”

“I am heavy in his arms, and I feel safe there, but I am lost, and I need constantly to be shoring up the wall that holds my emotions at bay, or I will feel something too great to contain.”

Pick a song, any song, and if you don’t like his music? Or his raw, emotionally-tainted vocals? Read the lyrics. Read the stories behind it.

The only band I listen to is the Mountain Goats.