A Sympathetic Protagonist doesn't have to be Likable: Spider Jerusalem

Transmetropolitan is a comic by Warren Ellis that is fantastic. It’s enthralling, it’s brilliant in the way truly good speculative fiction should be; It tells an interesting hypothetical future that’s a dark mirror of our current values, our current society.

But that’s not what I want to talk about it.

Transmetropolitan’s protagonist is Spider Jerusalem, a man most accurately described as Hunter S Thompson by way of Nietzsche. In fact, Transmetro is a sort of counter-culture adaptation of Thus Spoke Zarathustra. A wise man descends from the mountain to speak his truth, then returns to the mountain again.

Spider is a huge bastard. His defining trait, in fact, is being the biggest fucking asshole to absolutely everyone, all the time, forever. 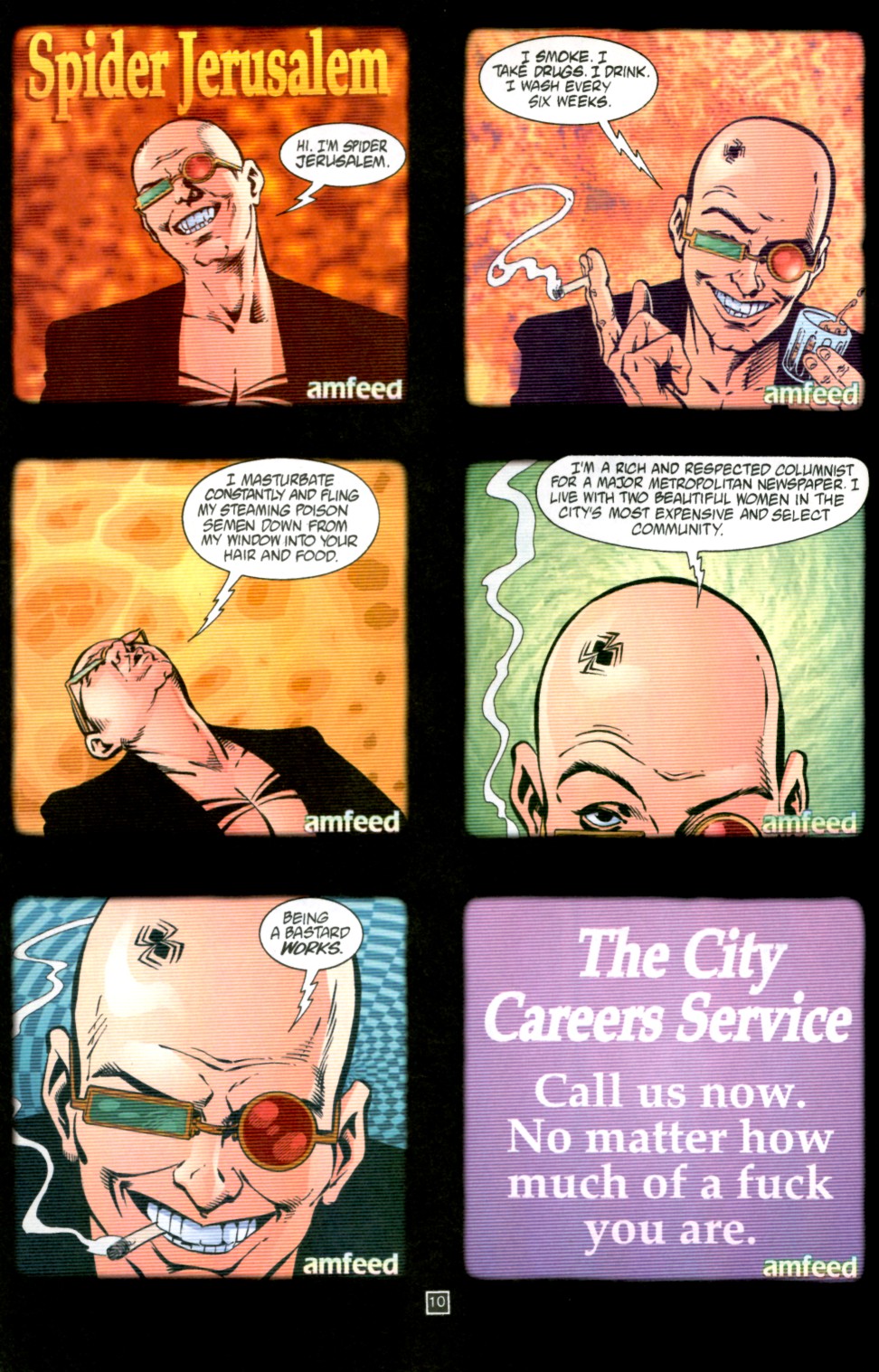 So who better than the king of bastards to speak about why your protagonist doesn’t have to be likable to be sympathetic?

Now, that being said, I love Spider Jerusalem, I truly do. As I said in a previous article, a good protagonist should read as a philosophy on why it’s desirable to be that person; Not necessarily that you would want to be that person, but why you’d immediately understand why they would.

This is obviously a very understandable character. We get that he’s the worst of our unchecked, most base and primal impulses. That’s… not very respectable, or an ideal we should want to live up to, but it’s an understandable and honest one.

All of this, however, stems from Spider Jerusalem’s twisted idealism. He truly wants the best for people, and for people to be better. He’s a goddamn, motherfucking journalist. He’s shown to be open-minded and extremely empathetic. He doesn’t doubt that people can be good, and when he meets people he finds to be good he comes across as… humble, kind, respectful. A patient listener.

All he wants is the Truth. He wants people to be honest, to be good, to be better. He sees the people who do good get trampled and abused and even murdered by assholes and bastards, and he hates it. He abhors it. Why did he go up to the Mountain, leave society behind? Because the people loved him, and bought his book covering the election of The Beast — the president at the start of the comic — and vote him in anyway. His election coverage novel is a colossal bestseller, and everyone read it, but it didn’t change anything.

He’s a man that’s broken by a broken system. He’s not even screaming into the void; Everyone’s listening, but nobody’s acting. Ostensibly because they can’t in a polite society. Because they’re not willing to be bastards themselves.

You come to appreciate that’s why he’s such a miserable, bitter, angry, cynical bastard. He’s a crushed and wounded idealist who’s just… given up on being anything else. Those few times he believes he can make meaningful change are what drive him. 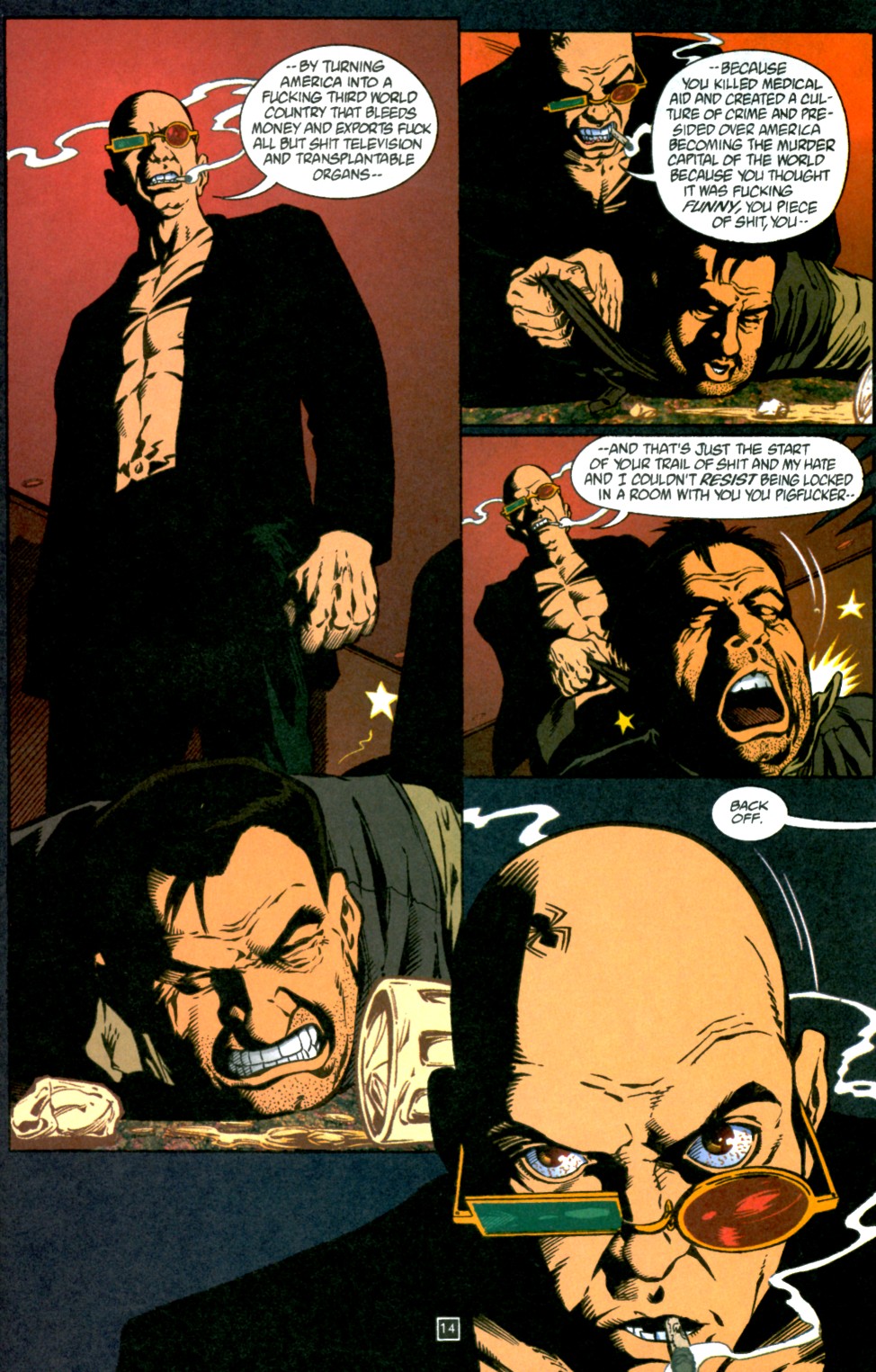 Problematically, to be a colossal twat to everyone who gets in his way.

Spider is my favourite protagonist of all time, of anything, ever. He’s not much to everyone’s taste. He’s a piquant protagonist, but he’s fantastic.

All of this is to say; it’s a very common misunderstanding that a character has to be likable to be sympathetic. Or that they have to be morally good. They really don’t!

It’s usually a reaction from authors who are told their characters need to have flaws to be interesting, go too far in the opposite direction, then overcorrect. Or advice given by people trying to correct people who write too unlikable characters.

It’s true that characters shouldn’t be unlikable for unlikableness’s sake; Characters that pull guns on people just because they’re mildly frustrated, have unchecked anger problems, are too hardboiled for you to understand… they’re a problem. Sure they are.

The end result is a character that can be seen as ultimately spineless. Being nice is only meaningful if it has a deeper reasoning, a deeper reason behind it.

He has a third dimension like that. We understand the bastardry as coming from a place of intense caring, of frustration at the human condition, and we have depth to the significance of the kindness by seeing how much of a bastard he is even in situations where he’s shooting himself in the foot by doing so. We know it’s not artificial. We can see it’s genuine compassion, because kindness is never a tool he uses to get what he wants.

Spider Jerusalem is shown to be a bastard, but also capable of sincere kindness. So we see him as a complicated, conflicting individual.

Captain Carrot from Pratchett’s Discword series is another example from the other side of the spectrum. He is always kind, reasonable, compassionate. He’s the kind of man that stops a war by encouraging both sides to engage in a healthy game of football.

He lies, if it stops greater violence. He tells half truths with a completely honest face. Because people expect the best of him, they never expect the lie. They don’t think to analyze him.

Carrot’s a cop, because even though it forces him into situations that make him act against his better nature, it’s the position that allows him to do the most good for the most people.

Spider Jerusalem is a fantastic character because he’s a true bastard who is capable of being truly good and kind in ways we should aspire to, but he’s usually not. He’s incapable of being that good person because of the perceived failings of the society he lives in. He can’t be good and happy until there isn’t a society causing immense suffering to those around him.

He’s a journalist, because if all he has is a gun with a single bullet in it, he’s going to try to blow a kneecap off the entire goddamn world.

How their actions, likable and unlikable, tie into their beliefs.