That Joke In Anime

One of the commissions I offer is that, for just $7US per hour of content, I’ll sit through anything you want me to and I’ll catalogue the results live in my Discord server.

So far a lot of people have taken me up on this offer. I’ve even watched the single worst thing on Netflix, Leo the Lion, which will haunt my nightmares for as long as I live. Every time I close my eyes, I see the badly 3DCG baby lion-elephant hybrids imprinted behind them, and I break out in a cold sweat.

The rest has, without exception, been anime. All of it. A lot of anime.

This is probably because, until recently, I’ve been confident that I just didn’t like anime. And whenever I’ve told someone I don’t like anime, they’ve gotten some mixture of offended and excited to share the bounty of Japan with me and recommended me something and…

Never stuck, never liked it, and just reinforced the idea in me that there’s just something about ‘Japanimation’ that would forever be a mystery to me, like how people who aren’t me probably feel about Vegemite.

[To be added: Gratuitous picture of the author eating vegemite directly from the jar with a large spoon]

Then, about a year ago, Julio recommended me a manga, Bakuman, and an anime, Death Note, and I learned I loved at least one anime, and some manga. Then I tried One Punch Man and I actually loved that too. I even like the sub more than the dub, a fatal error.

The weebs smelled blood. I had been baited into their dark alleyway, and I was careless. There was a brief pain, then blackness.

When I woke up, I had a hangover, a Crunchyroll subscription, and dim memories of what had happened. Tengen Toppa Gurren Lagann, Sora yori mo Tooi Basho, Stein’s;Gate, Little Witch Academia, Code Geass, [C], Dokgo and Akagi had pushed me over and taken turns kicking me when I was down.

I didn’t like all of them, but I actually really loved some of them. Gurren Lagann and Stein’s;Gate especially stand out to me, and I’m genuinely excited for the new Code Geass coming out soon.

But one thing bothered me every time, in every anime.

And coming into anime later, as a non-anime fan, it’s surprised me how much anime fans don’t notice That Joke.

This came up watching “Sora yori mo Tooi Basho” most recently. In English it’s translated to A Place Farther Than the Universe, and it’s about four sixteen year old girls journey to antarctica. It’s a slow boil slice of life with some of the best sound design and mixing I’ve heard, and sometimes it just looks like this. 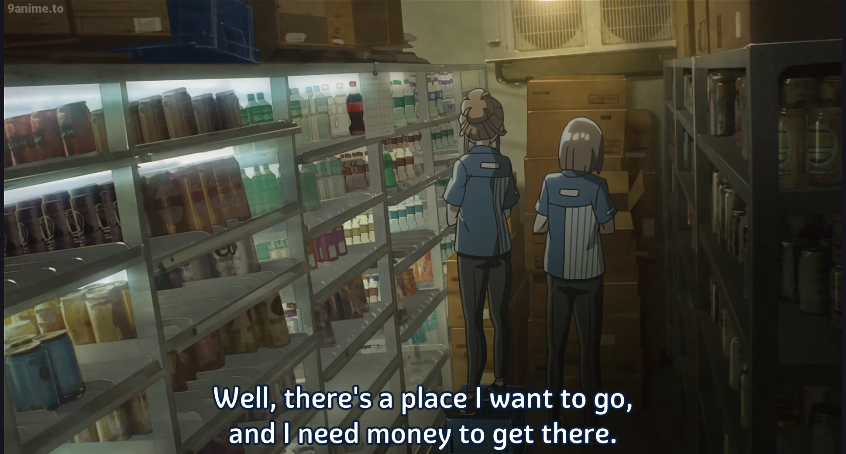 It’s a beautiful shot, and it should show how high the production values are. Even just the detail on that one single misfiled Coke bottle is absolutely delicious. Two sixteen year old girls working at a convenience store trying to make enough money to make it to Antarctica, and this shot should tell you the tone of it.

The same episode, minutes later, makes That Joke. That Joke which, if I hadn’t gotten more used to anime by this point, probably would have made me drop the whole show.

These girls need more than money to make the trip. Their leader comes up with a plan: They’ll seduce one of the men already going! They throw the lead protagonist out to do it.

The plan doesn’t work, because she isn’t sexy enough!

So the three girls, young girls, fight over the plan. Not whether being young girls in Tokyo’s red light district trying to hit on complete strangers is a bad idea or not, but over who has the biggest breasts and is therefore the most seductive.

This is how it’s pointed out why it didn’t work the first time. She had the smallest boobs in the group. How could they possibly have expected any man to be seduced by her criminally flat chest? 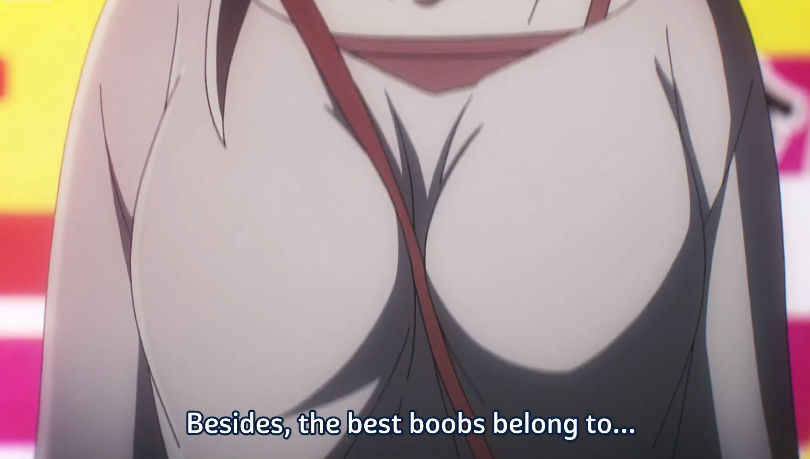 Men only care about the size of your chest. This is very important to remember. Their quest tests for the best chest, as you can see.

How does their fearless leader react to being outed as the winner of the impromptu best breast award? 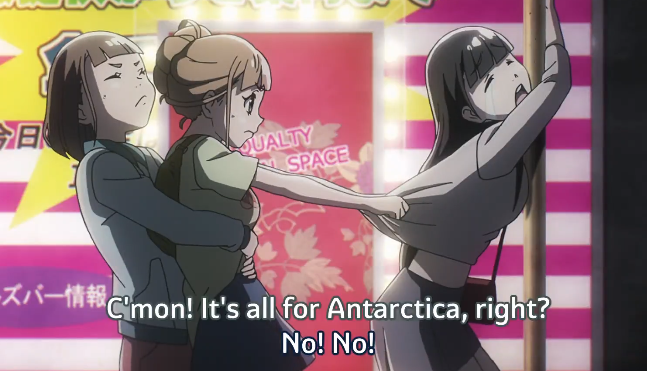 The sixteen year old breaks down in tears over not wanting to seduce the strange men, while her two friends force her into doing it.

It’s a funny joke. You’re supposed to laugh, because it’s so awkward. But visually, it’s played as an excuse for those seduction shots and chest close-ups.

I actually brought it up to the person who commissioned me watching this series, and he said of it:

That’s the point of That Joke in anime. That Joke is when the show does something gratuitously sexual, and draws a lot of attention to just how overtly sexual it is, but always in the context of it just being a joke. Or, not what it really is. It’s sexuality purely for the audience’s benefit, while being able to play it off in-universe as something else.

Sometimes there’s even an attempt to make That Joke plot critical. In this case, it was important the girls failed at their plan in a way that the leader of the three girls was caught.

It would be an easy mistake to take it for granted that the seduction shots like this were necessary, but A failed plan was needed, not thisfailed plan.

That Joke ends up playing two roles. The first is fanservice: It’s there to titillate the audience with 2d titties. The second is that the ‘joke’ part of it, and the narrative angle of it, provides cover and plausibility for the first role, especially when the fanservice is of otherwise underage characters.

And if you’re an anime fan, who doesn’t think about it too hard, you probably don’t have a reason to notice that’s what happened at all. You’re not supposed to think about it.

The degree to which That Joke is used is pretty proportional to how overt the sex appeal of the show is. The more overt the fanservice is in other ways, the less That Joke is needed to fill in the gaps.

Like, take Gurren Lagann. It didn’t make That Joke, because all the fanservice was provided by the character Yoko existing. Just her being on screen seemed to cover that base. 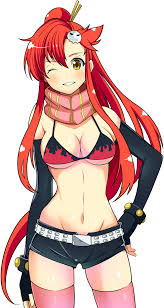 Yoko’s a legitimately great character, though, and extremely competent. Her sexiness is always present, but it’s rarely done in a way to denigrate or distract from the character.

The closest Gurren Lagann gets to making That Joke is when she wears a bikini to the beach, and people pay more attention to the other female lead. When she shouts she’s wearing a bikini, everyone points out she’s somehow showing less skin than usual.

I actually laughed really hard at that. It was a great joke, because it was at the expense of Yoko’s vanity, not at her sexuality. It wasn’t That Joke.

Bring in That Joke. A lot.

[Can I get a Scarlet or Aragon riff here since I haven’t seen Dragon Maid?]

I think the version of That Joke I see the most often is women being forced or coerced into sexy costumes. Most commonly it’s a Sexy Maid outfit, but the other big one, following Haruhi Suzumiya’s lead, is the Playboy bunny leotard and fishnets.

It gets you, even in the good anime. Like, I love Code Geass, but there’s a scene in it where the tough badass Kallen was forced into a Playboy bunny outfit for a while, something she was really unhappy about.

It’s a really funny joke, because she’s a competent martial artist who’s forced to wear overly sexualized clothing against her will.

How does that play out?

Well, we get a fight scene in it. 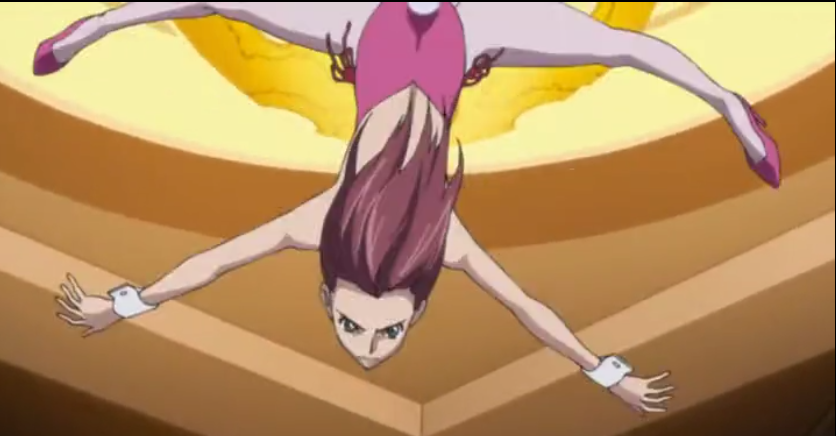 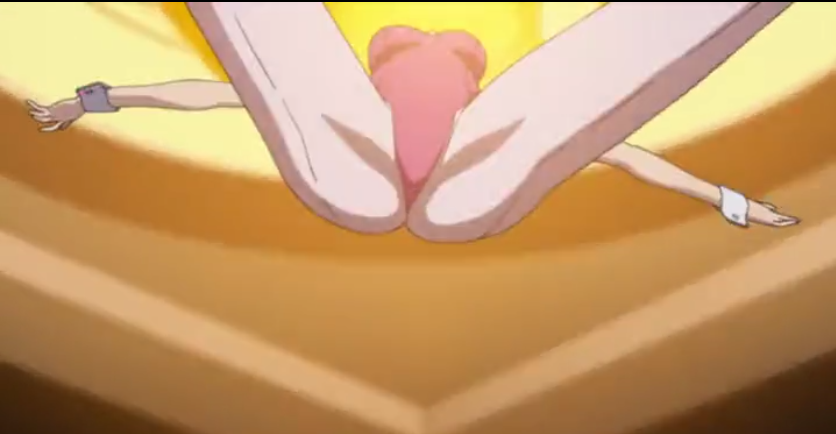 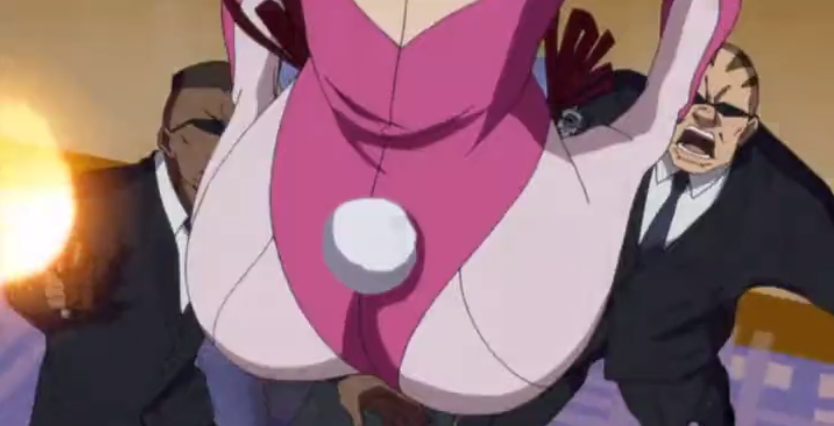 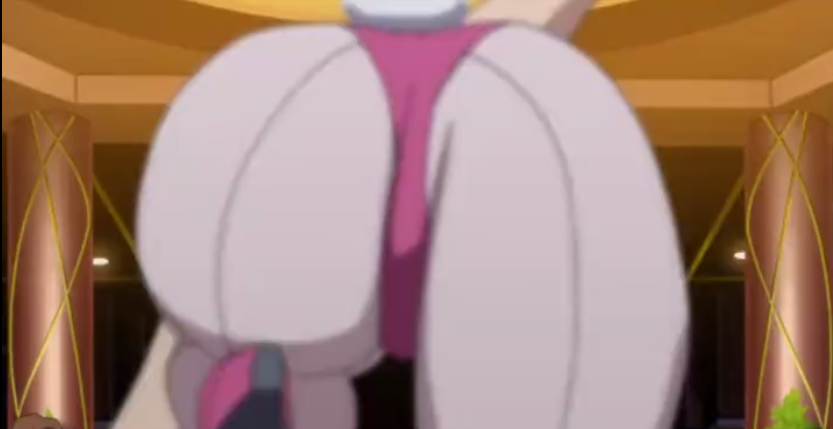 I mean the kick itself is brutal. Kallen’s a really cool character, and she ends up snapping out two guys who’d pulled guns on her. It’s just the the end result of the flip is this motion: 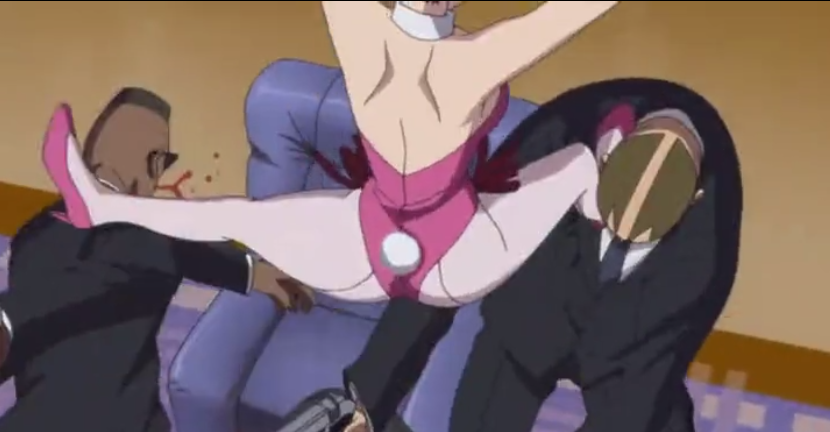 And that made me really uncomfortable at the time. I liked Kallen a lot, and it seems like an unfair way to treat the character. More importantly, it made me wonder if I liked her for the wrong reasons, or that her personality was just a justification of the fan service moments.

It made me like the show less, because I felt like it was trying to exploit its characters and manipulate me.

The point of The Joke is to make the sexualization feel less overt by making it clear the characters don’t want to be sexualized like that, as if to apologize for doing it, or explain they wouldn’t normally do this for you, audience, buuuut.

Which means it associates women’s sexuality with coercion. How often That Joke is made, and how assumed it is, makes it clear that women are desirable, but the only way to get what you want out of them is to force them into it somehow.

There’s no such thing as enthusiastic consent, it’s just putting them in a situation where they can’t say ‘no’.

Maybe that’s why you never see That Joke made about the anime characters like Yoko? Because That Joke only really works when characters who don’t want that attention, get it anyway.

And as long as Japanese content creators keep being pressured into it to boost their ratings, we’re going to keep seeing That Joke.

Because it keeps working.