Why Do Empires Lose Wars?

It was the last days of the Iberian campaign of the Napoleonic wars, the Duke of Wellington’s finest hours. Gun smoke from hundreds of rifles hung thick in the air just north of the Tarbes river; Losses on French soil, now, not Spanish. One of the last battles of the campaign, the battle of Toulouse, was over.

Colonel Andrew Barnard of the 95th Rifles, a three year veteran of the campaign, ran to the Duke of Wellington to tell him to witness what his men had done. Barnard was not a man easily impressed, having survived and fought on after being shot through the lung at the storming of San Sebastián. To him Wellington replied;

“Well, Barnard, to please you, I will go, but I require no novel proof of the destructive fire of your Rifles.”

Still, what he saw was more than simply impressive. It was awesome in the saga sense of the word. The second battalion had been severely outnumbered before reinforcements could arrive, but even then it had been a disastrously uneven fight. Fighting on French soil meant that the enemy officers knew the terrain well, and could prepare ambushes and tiered trenches in covered hillsides, an ambush of double-rows of trenches able to fire over each other against the skirmishing infantry.

Against conventional tactics, it would have been a wholesale slaughter in favour of the French. But the 95th were unconventional, the first regiment in the British army made entirely of light infantry. Usually reserved for mercenaries — German woodsmen, Spanish hillmen — “Natural hunters” — the British army had taken its first steps towards a unit of men with agency who could pick their own targets, take cover, move, advance and retreat on their own initiative.

Men who were taught to aim before shooting, as the rest of the army weren’t meant to even try. To the rest of the infantry, the only thing that mattered was rate of fire. The ability to fire three times in a minute were all they were drilled on. Get enough men pointing their guns in the approximately correct direction, have them all standing shoulder-to-shoulder in line with their fellow man, then charge with fixed bayonets for a melee? That was the way of the grenadier.

The riflemen couldn’t fire their Baker rifles that fast, and were deemed useless for it compared to traditional musket infantry. It was not considered how important a role accuracy could play. One in twenty shots from a rifleman confirmed a kill. It was closer to one in three hundred for a line infantrymen.

The effectiveness of these riflemen was what Barnard was showing Wellington in 1814: these outnumbered men had turned back those trenches and a cavalry charge. It is supposed that those 1,000 riflemen killed around 400 Frenchmen, and turned the rest, to losses of only 111 men.

What Colonel Barnard was showing the Duke of Wellington was astounding: A regiment of skirmishers had taken a heavily entrenched position, and withstood a cavalry charge, and come out ahead.

The rifles became a regiment of legend. Their valour and prowess, and their tendency toward meritocratic promotion — internal promotions were far more regular in the Rifles than in other parts of the army, though still far less than Napoleon’s own.

As the guns of Waterloo fell silent, the Rifles were mythical figures. Ten years later, their officers were writing fierce rebukes in military journals, as generals spoke once more of the true virtues of line infantry combat. That each man was only as useful as the whole unit, and that individual merit was simply… preposterous. By the end of the century, the rifles had been consigned to myth.

What had been taken from them wasn’t the value of independence, that morale of men remained much higher when they could focus on their actions rather than be forced to wait for orders. All that was learned was to incorporate basic marksmanship into the reloading drills, because soldiers are more effective when they aim.

It was forgotten for a hundred years, until the Great War.

It’s easy to look back at these moments in history and see the obvious ignorance with the benefit of hindsight, but why were these lessons so easy to forget? It wasn’t that the British had stopped going to war. India and Africa and China awaited them. It was that they stopped being at war with other industrialized nations.

In short, they never fought a war against an opponent capable of effectively using their tactics.

Those colonial tactics were associated with civilization. Fire by rank works much better against charging Zulus than light infantry tactics at those scales, it seems. Or, rather, it’s not worth using the more intensive, harder to manage tactics against opponents you have a technological, industrial and numerical advantage against. The solution is not worth the implementation.

The tried and true techniques of Napoleonic warfare remained devastatingly effective until the Boer war at turn of the century: Outrange your opponent with artillery to draw them into combat, outgun them while they clear the distance, then pin them with infantry fire and flank with cavalry. Later, entrenched machine gun positions served the role canister shot used to in clearing out exposed infantry ranks.

These were still the methods used by all the major powers during the Great War. Entrenched infantry, trying to outrange with artillery… except the wars weren’t being fought in colonial lands anymore, and they weren’t against colonized locals. It was against industrial nations with similar capacities, who were also determined to out-artillery the opponent’s entrenched troops.

There were no commando units on the British or French side. Why not? The British had pioneered the concept with the rifles a hundred years ago, and had simply forgotten about them. The French officer corps had been destroyed by them, and simply forgot. For that, they took losses equal to the Germans.

It wasn’t a technological issue. A commando is just an especially highly trained soldier with slightly better equipment than usual. But the idea is novel, because it requires a soldier to operate outside of a command structure, and that was a difficult idea for the Monarchies to grasp. Commandos didn’t exist because there had been no need of them against the colonies. 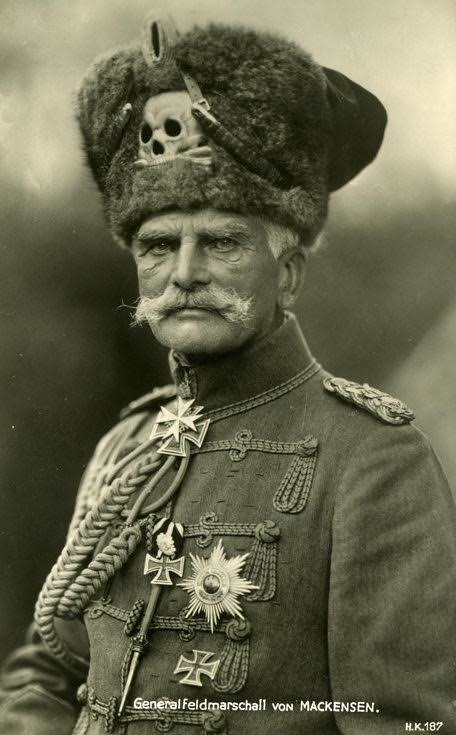 Do you know who Germany feared, above all else? Serbian peasants. In 1914, August von Mackenson, a man who would wear a giant skull hat to dinner parties said to his men;

“You are not going to the Italian, Russian, or French front. You are going into battle against a new enemy – dangerous, tough, fearless and sharp. You are going to the Serbian front and Serbia. Serbs are people who love their freedom, and who will fight to the last man. Be careful this small enemy does not cast a shadow on your glory and compromise your successes.”

The Serbs were devastating, using light infantry tactics to snipe and pick off officers without engaging them on their terms. They engaged with the peasant style of marksmanship, which a friend of mine endearingly explained as; “This bullet is expensive. Make it count.”

It was the tactics of an industrial nation that had not been colonized, or been a colonizer. While Serbia eventually fell, many monuments would be erected of the defenders by the awestruck Germans.

Serbia was not a colonizer. It was simply trying and failing to not be colonized again. Somehow, whenever Empires show up, they prove it by committing genocide against Serbia at some point, regardless of where on the planet the empire started.

I feel like we’re at a similar point now.

In 2003 a green beret lies on the sand, holding a laser pointer to the target from a remote hilltop. He’s grumpy because he’s got sand in his everything, and it’s taco night back in the Green Zone. After half an hour of this, an AC-130 gunship circling overhead several kilometers above and away makes a noise like a dragon’s hiccup. The sound doesn’t reach him until after the explosion, as the enemy camp becomes a cloud of sand and glass.

He crawls back, never having been seen, and furious that these dumb goatfuckers wouldn’t be more co-operative with the peacekeeping efforts so he didn’t have to be here.

If this was a first person shooter and that was the whole game, you’d get bored and turn it off because of how unchallenging it was. Modern hollywood screenwriters seem to be desperately scrambling through recent history looking for the one time where things were kind of hard.

And I think that’s a sign that, for all the wars Western powers have been involved in over the last seventy years, we have the war experience of Empire. We find ourselves in the position of the British at the turn of the century.

Something you see pop up in action movies is the generals around the war table advising the benevolent President. They are introduced; “Sir, these men have the experience of a dozen wars between them.”

At some point the answer has to be; “Mostly, sir, co-ordinating the coups of all those South American countries”.

And the gap between Empire and not has grown wider than ever. The Serbians were crushed in 1998 in the Kosovo war: NATO suffered no combat losses for the entire campaign.

I say this because we have an alternate timeline where a more competent US Republican was elected. Say, Ted Cruz. They would likely have pushed hard for a war against Iran, a nation in a much different situation to, say, Yemen, who will lose two thirds of their population to famine, with their fields bombed and their ports blockaded by a US/Saudi/English/French coalition.

This leads me to mentioning the Millennium Games, a 2002, $250 million dollar war game exercise of mixed live-and-computer-simulated war games. Iran’s Red team, led by General Paul Van Riper, against the US Blue team. On the first day of the fourteen day planned exercises, the Blue team sent a demand of surrender to the Red team. Riper sent a simulated barrage of missiles and suicide boats, sinking the entire US fleet on the first day.

The simulations were faulty and he got away with some things that simply would not work in real life… But there’s a legitimate point here that he did that because he was working with the constraints of the simulation, which were slightly more generous. A more realistic take on Riper’s strategy was not tested.

Van Riper said the exercise’s purpose was just to reinforce existing doctrine and the idea of an infallible, undefeatable U.S. military rather than serving as a learning experience. The war game was rigged to validate the concepts it was supposed to be testing.

The exercise was completely redone, this time ‘correctly’. Obviously, the United States victory was supreme this time.

Was it so unrealistic that the unconventional tactics worked? Just how it was so unrealistic to see the might of the German Empire turned back by poor Baltic peasants during the Great War when they couldn’t against the seemingly greater armies of England and France?

It’s an interesting thought, then, considering how many parallels the world is coming to the conditions that led to the first World War.

It is legitimately terrifying to think what the 21st century equivalent of the Somme could possibly be.